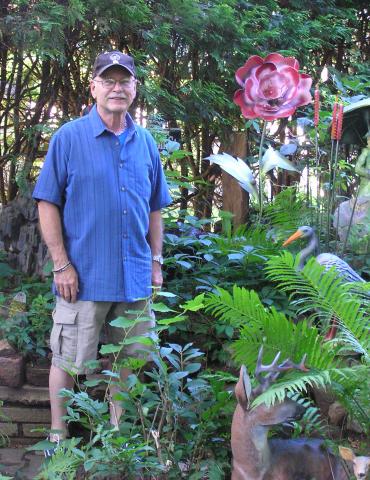 This summer I visited a familiar garden I watched grow and change over my adult life. Like my brother-in-law, Gene Dees, who creates and tends it, the garden has grown and matured over the decades. This year I realized a new appreciation for his decades of imagination, creativity and skill. What was once a typical northern garden, Gene's landscape has been transformed into an eclectic garden of depth and whimsy with the power to draw one in and sustain one's curiosity and interest.

My sister Jean and her husband Gene moved into their home in Rothschild, Wisconsin in the latter seventies. Gene was born in the Castle Straubing, near the old Roman town of Straubing on the banks of the Danube River, in the region of Bavaria, Germany. His family immigrated to America after WWII when Gene was a boy. Gene stayed behind in Straubing with his grandmother until age fourteen, and quickly adapted to his new country when drafted into the Army. A veteran of the Vietnam War, Gene used gardening as a way to work through the problems of PTSD and diabetes, in effect, turning lemons into lemonade. 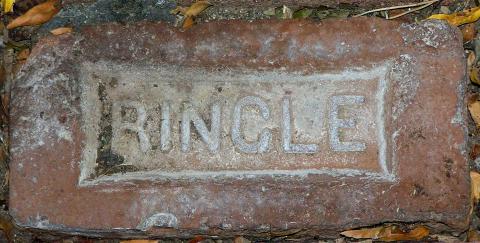 As fate would have it, or what later was considered luck, across the street from their property was a city landfill, recently filled in. As often happens with city planners, the park that was promised never materialized. Instead, the former landfill became a drop off point for discarded, unwanted landscaping material of all kinds. Coinciding with the need to combat symptoms of PSTD, Gene noticed quantities of Ringle bricks (from the old Ringle Brick Company), stone, soil and grass clippings were dropped off on a regular basis. Wheelbarrow in hand, as time permitted, loads of brick and stone were carted across the street to the backyard. 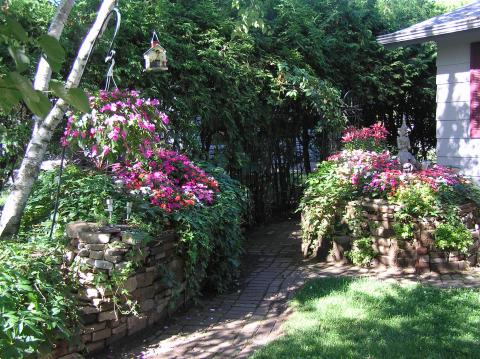 The structural outline of the garden spaces took shape in 1978 with the purchase of 150 cedar seedlings, purchased from the old Redman Nursery 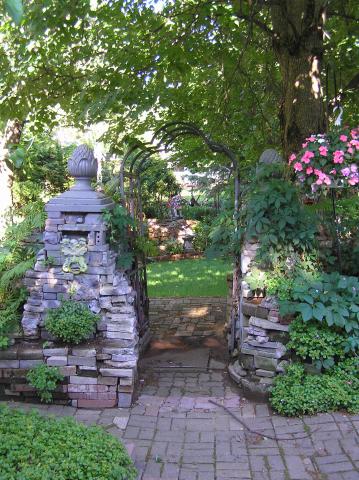 in Mosinee at a cost of 75 cents each, replacing the black willows that grew in their backyard. The diminutive cedar seedlings that formed the hedge surrounding their lot now tower twenty feet high. Interior hedges were composed of the shrub alpine current, Ribes alpinum, when Jean noticed a load being dropped off one day. They were soon across the street, planted in their new home.

Gene's design was inspired by labyrinths created in local corn mazes and by stone walls in agricultural fields near the land where he hunted. Not unlike his homeland in Bavaria, as Wisconsin was settled in large part by German immigrants like himself.

Some days, his haul would consist of 4 and 5 wheelbarrow loads. It didn't take long before he modified the wheelbarrows to be able to support heavier and larger loads. Over time, he's worn out three wheelbarrows, and is still hauling.

Slowly the outline of the intricate design took place. Over four decades, weekly and sometimes daily forays were made to look for building materials. One had to be vigilant, I'm sure he wasn't the only scavenger. Periodically, city workers with front end loaders would cover the castoffs making discovery and recovery more difficult. Occasionally, after noticing Gene working on the front yard walls, people would come by and stack their unwanted materials on his sidewalk, returning later to see the end result.

At first the walls were low, then over time and with the availability of re-purposed soil and rock, bricks and capstones, the walls grew in height. Gene re-built and dry stacked the walls for stability and design, often redoing wall sections when more suitable rocks and bricks were dropped off. 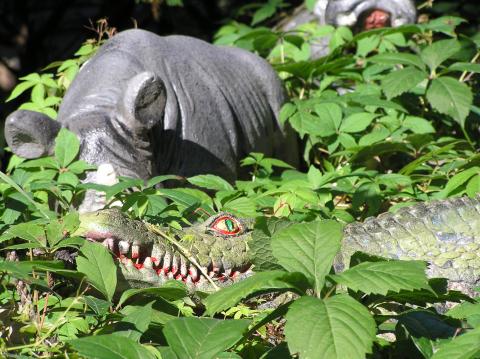 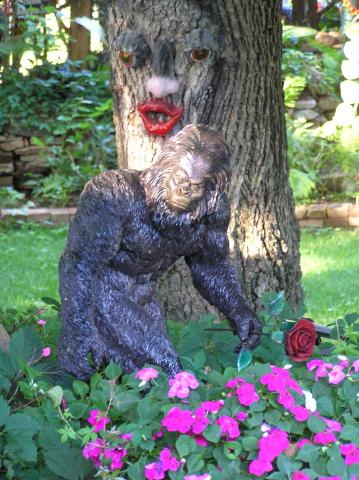 animals to catch the interest and delight of neighborhood children and grandkids alike. A hippo and croc are poised to nosh on any proffered fingers. All that is missing is the clank of the teeth to cause a quick pull back and nervous laugh! Just follow the brick paved paths through the cedar tunnel along the side of the house and begin your journey into the belly of the garden. But watch out for the mean looking Sasquatch!

While most of the garden is a journey of joy for kids of all ages, the grandkids are probably his biggest admirers. I can only imagine the hours of delight they'll enjoy in latter life remembering running through and around “granddad's garden”.

The garden is a whimsical delight that compels one to stroll at leisure, beverage in hand, or in my case, a camera. The garden is very shady, which only adds a sense of mystery to the craftsmanship and wit displayed. Ornaments purchased in countless area cranberry, apple and pumpkin festivals, as well as through yard and craft sales and gifts, are highlighted as sunlight moves across the garden. Comical and cartoonish characters come into view around every corner. Metaphors and puns are placed and repositioned until the effect is perfected. Some of the best examples are the Prince Frog and blue steel flowers amid of bed of leaves that give the effect of frog in a pond, a pelican on it's roost and creepy crawlers in every crevice. 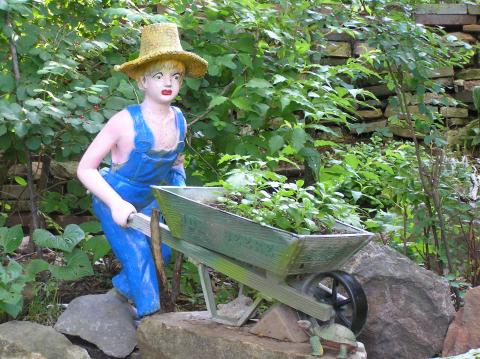 That's not to say the garden doesn't change. A few years back a nautical theme dominated the interior of the garden. But in this northern climate, weathering and rain took their toll on the ship's wheel and ropes – out they went for more durable accessories. Grass paths were replaced by discarded newspapers covered by dumped grass 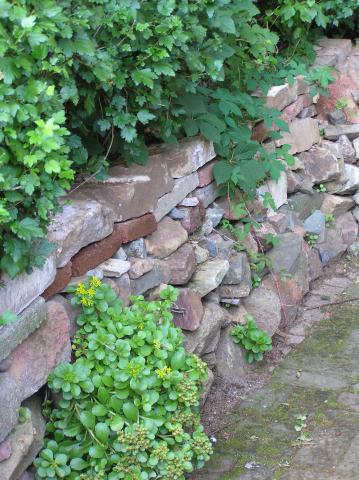 clippings, then by load upon load of jettisoned brick. When did brick ever become so out of fashion, one is forced to ask?

Some gardens can be overwhelmed by a collector's obsession with objects d' art. Thoughtfully acquired and tastefully placed, they are tied together by the structure of the garden --  the bricks and rocks that make up the walls and pathways. Even Gene's Salad Bowl garden is seamlessly integrated into the larger landscape. Lettuces, tomatoes, onions, and radish all with their own cast of characters overseeing their growth lift one's mood when gathering the evening's salad. 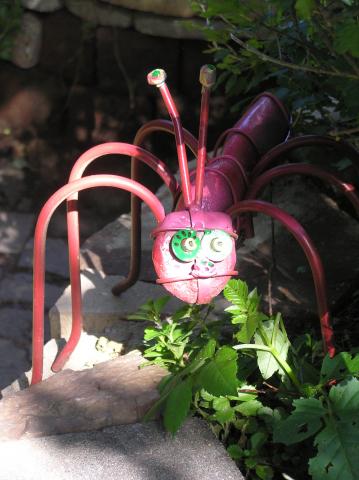 I love my brother-in-law's garden more than just about any garden I've visited. His combination of the elements of structure, materials, creativity, imagination and above all, his passion, infuse his space with that sought after escape from the real world. This is not a polite cookie cutter of a garden, built from objects chosen and installed all at once for maximum coordination to fit in with every other neighbor's garden, street after street. Gene's garden of a thousand bricks reflects himself. It's a mature garden, developed over time, re-purposing cast off items while at the same time working out some of the rough edges life deals. Its a metaphor for life, a reminder not to take life too seriously, but to live well with what's on hand. 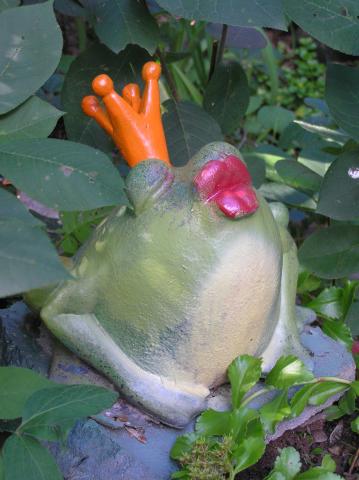 From the moment I exit the car, I'm transported to a magical and imaginary world of childlike happiness where every day cares disappear, where life is a simpler and wonderful place to be. As Gene will attest, his journey of ten thousand bricks is the most important thing, not the destination. For the rest of the family, this destination has a special place in their hearts.