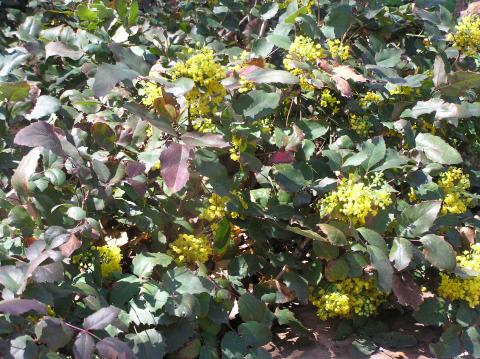 Most gardeners could recite a list of evergreen shrubs or trees that have been the backbone of gardens since the nineteenth century. Probably none of them, except for a few native pine trees and juniper shrubs are native to North America, and especially not native to the Southwest.
I've come to think of many of our Southwest native plants in a non traditional way, that is, as Southwest evergreens. Yucca's, agaves and cactus are three genera filled with evergreen plants – that is, plants that are not deciduous, shedding their leaves in fall and regrowing them in the spring. I've started to refer to them as our Southwest evergreens, in hopes that others will populate their low and medium water-use beds with yuccas, agave and cactus much as one used non-native evergreens. They provide a steady year around presence. Cactus and yuccas flower yearly, albeit briefly. But then, many shrubs flower briefly.
This list of plants are the other Southwest evergreens – plants native to the American Southwest, are evergreen or ever-gray, but are not yuccas, agaves or cactus. If you are planning on establishing a xeric bed or border, I hope you will find this list a handy reference. I have seen or tried nearly all of these plants. I'm sure the list is not complete, and as I come across more, I will add them.

These plants grow in a wide range of alkaline, sandy, caliche or clay soils. Many of them have a great deal of flexibility. Whatever your soil type is, amending with 3 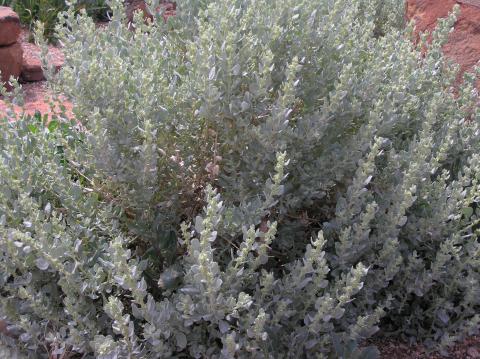 inches of compost gives the plant a terrific start. With heavy clay soil, amending with an inorganic amendment such as expanded shale, calcined clay (Turface) or even sand improves soil drainage.

As all these plants are native to the Southwest, they are xeric once established. To keep them healthy and unstressed, water an inch a month, if that amount of rainfall is not received in any given month during the growing season.

Southwest Evergreen Plants Other Than Yuccas, Agaves and Cactus

Arctostaphylos pungens, Pointleaf manzanita. Low growing shrub up to 4 feet tall, but will spread to about 12 feet wide over time. Eye catching smooth rust colored bark contrasts beautifully with its oval to lance shaped evergreen leaves. Small clusters of tiny urn shaped white to light pink flowers in late winter/early spring develop into red edible fruits in summer. Attractive to wildlife as well as humans. This is the most heat tolerant of the manzanitas. Grows throughout the Southwest. 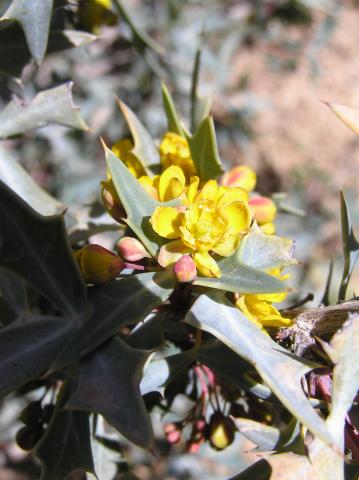 Dasylirion wheeleri, Sotol, Desert Spoon. Member of the Lily family, southwest native can be found in the Big Bend National Park, cold hardy to -15° for 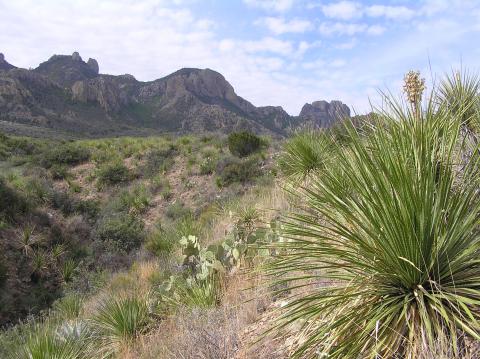 brief    periods – but must have sharply drained soil to survive those temperatures. Sotol is also called sawtooth yucca because of it's toothed narrow blades – resist the temptation to run your hand down the leaves. Will grow up to 4 feet tall and 5 feet wide with an appearance similar to yucca. Its creamy white flower is also yucca-like with the spike growing up to 10 feet tall. 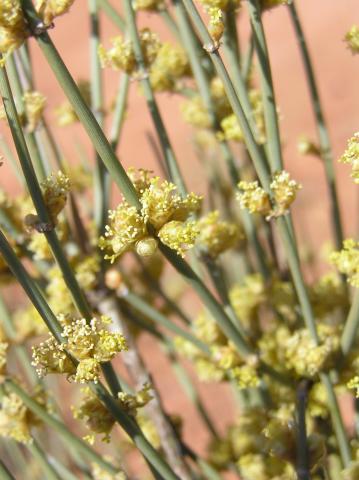 Hesperaloe parviflora, Texas Red Yucca. Not actually a yucca though it is always called Texas Red Yucca because of it reddish pink flowers that are not yucca-like, more like an aloe. Yucca-like leaves are thick and evergreen in nature as in color. Will usually grow to 4-5 feet tall and wide. Very versatile plant and well used because of it's evergreen color and long lasting red flowers (a hummingbird favorite), will grow in most soils, sun and shade, cold hardy, heat and drought tolerant. Varieties are now available with true red flowers, and yellow flowers. 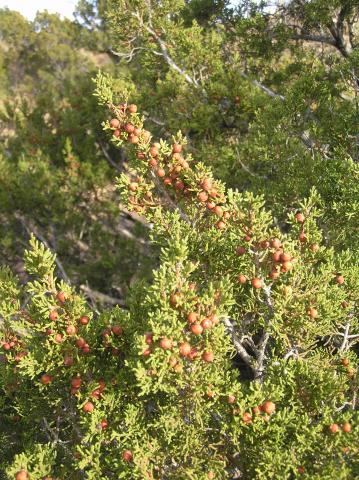 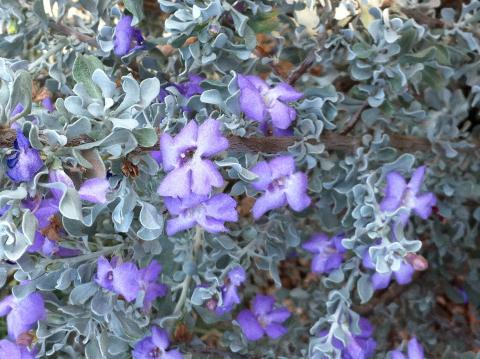 Leucophyllum minus, Big Bend Barometer Bush, Lesser Texas Silverleaf. Silver gray shrub that flowers with lavender to purple flowers in mid summer to fall, usually after a rainfall. Native to the Trans Pecos region of Texas, into New Mexico and Mexico. Said to be semi-evergreen, however, this February, my plant still retains its leaves after several bouts of near zero weather and snow. It is the most cold hardy species of the Leucophyllum genus.  Needs well drained alkaline soil, heat and drought tolerant. Needs full sun. 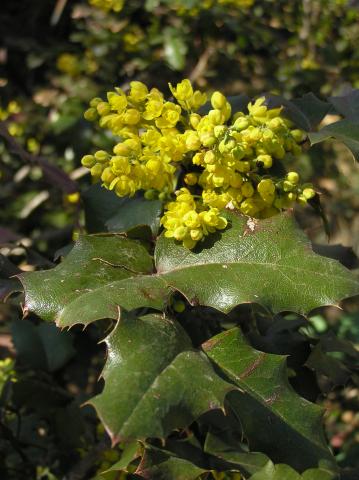 Mahonia aquifolia, Oregon Grape Holly. Evergreen holly-like shrub will grow from 4-10 feet tall, depending on moisture. Attractive yellow flowers in late winter followed by clusters of dark blue berries. Prefers shade and a richer, moister humusy soil, becoming xeric once established. Native throughout the Rocky Mountain range. Prefers shade.
Mahonia reptans, Creeping Oregon Grape Holly. Slow to establish in our alkaline soil, amend well with compost, also adverse to our saline water, may take 3 years to establish. But once it is, this low growing groundcover will spread nicely over the years. Flowers about the same time as M. aquifolia, in late winter, followed by dark blue berries in summer. A true four season of interest plant. In winter, the glossy, green and prickly leaves will turn shades of red when exposed to the sun. This is a great understory plant in shaded locations.

Nolina bigelovii, Desert Nolina, Bigelow's Nolina . A grass-like to yucca-like evergreen plant native to an area near Flagstaff, AZ, and also throughout the SW and California. Cold hardy, heat and drought tolerant. Many creamy white inflorescences on a tall stalk up to 6 ft.
Nolina texana, Texas Beargrass, Texas sacahuista. Another Southwest native, a member of the Lily family. Grass-like leaves and clumping appearance, narrow and stiff, olive green in color, with with threads that curl at the edge leaves. Leaves can grow as long as 4 feet. In spring, vertical clusters of flowers form on short stalks that barely reach above the top of the plant. Texas Beargrass is a good choice for those wanting an evergreen grass-like appearance in the bed or border. Grows from 1 1/2 – 2 1/2 feet tall and wide. Attracts butterflies.
Nolina microcarpa, Beargrass, Sacahuista, Sacahuista beargrass. This Nolina has fewer, slightly wider and thicker leaves than Nolina texana, and therefore is more yucca-like in appearance. The flowers are smaller and less dense as well but grows on a little longer stalk. 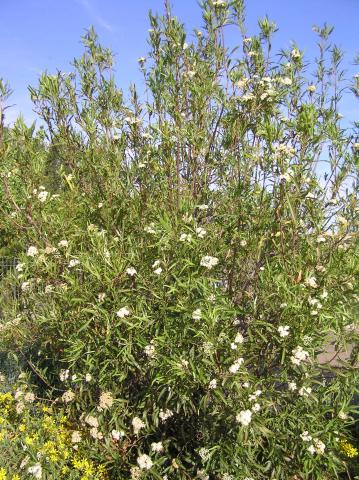 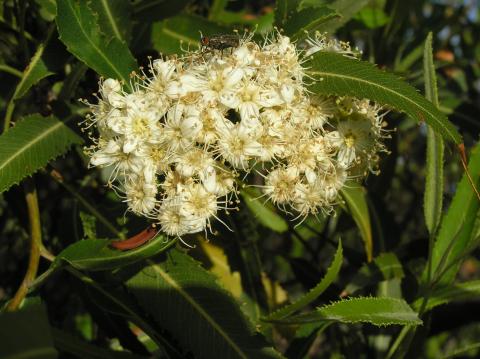 Appropriate Grasses for the Texas Panhandle

Shrubs for the Texas Panhandle

Gardening With Tulips in the Texas Panhandle, Part 1, Species Tulips

Gardening With Tulips in the Texas Panhandle, Part 2, Garden Hybrids

How to Choose Plants

The climate and conditions for the Texas High Plains area are: