The purpose of this website is to promote a culture of gardening within the Texas High Plains Region by offering information on an easy and successful way to garden. My hope is that many more people will enjoy gardening, and gardening success, in the Texas Panhandle.

My Vision — Gateway to Southwest Gardens 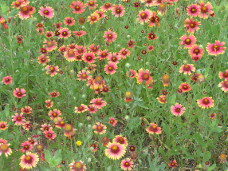 I have several goals, or visions, for the Texas High Plains region. I envision:

Establishing and creating this website is just one of the activities I do to draw closer to my vision for our area. I believe all four of my goals are attainable. Read through the rest of the website and give it a try. HighPlainsGardening.com is filled with information that will help you create gardens that are:

Featured Photos showcases tulip photos from Dallas Blooms at the Dallas Arboretum and Botanical Gardens from 2014 - 2019. But it's nothing like being there. Tulips are divided into 15 divisions, according to when they bloom, their height, and the shape and form of the flower. Most of the tulips featured here are in the following divisions: Single Early, Double Early, Triumph, Darwin Hybrid, Single Late, Lily-flowered, Fringed, Viridiflora, Parrot, and Double Late. In April of 2014, I wrote about the history of the tulips from the earliest known origin to the latest. I posted six articles on GardenNotes, with the first one Tulips: From Wildflower to Cut Flower, Part 1 of 4, Central Asia and Turkey . I can attest to the quote at the top of the first of the 6 articles: “I hold that there is an ascending scale in the enjoyment, and may I not say, the intellectual profit, that can be got out of a flower. At the lowest point there is the delight of the eye which is provided by the
ready made’ bloom; then there is this and also that added something which comes when we ourselves have done our little best to forward its development; but there is a higher plane still when, to the delight and the satisfaction of accomplishment, there is the unknown beyond to lure us on in a quest full of
difficulty and interest. In few flowers is this potentially greater than in the tulip.” (Rev. Joseph Jacobs, Tulips, 1912)

Check out my top plants for the season

Veronica x ‘Blue Reflection’ should be an indispensable evergreen groundcover for you, as it has become for me.

Mahonia repans is one of my favorite plants with four seasons of interest. Low growing and spreading evergreen shrub is native throughout the Rocky Mountains. Bright yellow berries in spring are followed by black berries in summer and reddish winter foliage. The leaves are thick, glossy and holly shaped. Creeping Oregon grape holly prefers amended, humusy soil that replicates its native habitat as an understory plant in woodlands, but is low water-use once established. It will spread to cover an area, but not invasive. Very attractive!

Oregon grape holly is an evergreen holly-like shrub native to the Pacific Northwest Rockies down into California. Upright, it is slow growing but can reach a height of 8 feet. Best when grown in shade, especially out of afternoon sun. Prefers a more humusy soil but will only required once a month watering when established, however, can also be placed in medium and high water-use areas. Bright yellow flowers in spring, followed by dark blue berries in summer. The thick, glossy, holly-like leaves have spines at the points. Leaves turn from green to red in winter.

Linum lewisii, the southwestern and western native perennial wildflower variety of flax was named after Meriwether Lewis, who was first to describe it during the Lewis and Clark Expedition. On July 18th, 1805, near the Great Falls of the Missouri Lewis recorded: "I have observed for several days a species of the flax growing in the river bottoms the leaf stem and pericarp of which resembles the common flax cultivated in the U'States. The stem rises to the hight of about 2 1/2 or 3 feet high; as many as 8 or ten of which proceeds from the same root.

Most notable in the meadows and fields of California, the California poppy grows throughout the southwest. Considered to be both annual and perennial, it either comes back the next year or it reseeds. Once you have a stand established, it should continue in your landscape, but not invasively so. This past summer of 2012, my California poppies bloomed in both the spring and our unusual fall. Blooms in April and May. Finely cut blue-green foliage make an attract plant outside the bloom period. The foliage should die back in summer.

Native evergreen shrub that makes an excellent hedge plant and wind break. Its blue-green prickly leaves keep the unwanted out (to a point). Please allow room for its spread.

A habitat plant for shelter and as a food source of food for birds and other wildlife that is an attractive addition to the home landscape, where an evergreen shrub is called for in a sunny spot. Sun yellow flowers in March. Cold hardy to -20°, algerita can be found growing from 4000 to 7000 ft. in elevation in Texas, the southwest and Mexico.

It was with great delight and excitement I first noticed what appeared to be the first tip of the stem. Having watched agave blooms on a weekly basis at our botanic garden, I was elated to be able to watch it hourly, if I choose, but certainly, daily. I took photos of this marvelous plant nearly every day for the first 6 weeks, then several times a week until the it finished blooming. Each morning, I made sure to check its progress. Afterwards, I photographed it less frequently until the end, but watched it daily. From stem to first emergence to the end of flowering was a period of 10 weeks. Here’s a brief viewers guide to our New Mexican Agave's bloom cycle.

Amarillo -- Degrees of Change: How Much Climate Change has Warmed Amarillo's Weather

Over the past two decades, Amarillo’s weather has changed noticeably. I thought the weather in 2018 to be particularly hot, but not quite as severe as the terrible years of 2011 and 2012. I didn’t enjoy the heat of these summers. Three really hot, dry, miserable summers within a decade. Will this be our future? Should I consider moving to a milder, wetter climate? How hot will it get in Amarillo, as global warming continues to warm? This article seeks to answer Amarillo’s degree of change.

A Visit to Longwood Gardens

HighPlainsGardening.com Celebrates 15 years of gardening information for the Texas Panhandle in 2020 -- still free and non-commercial!

Stepping Stones to Gardening Success. Check out the updated section on Stepping Stones, -- what to do in the garden, month to month. The entire year's been updated with some new information and links, and photos added. Just scroll down the Home page; it's on the right. Click on the Intro and choose a month.

The first vital principle of the Basic Gardening Principles is effective planning and design. Formulating your gardening management statement, determining your garden theory, settling on the style, working out the design, and deciding how the garden will be used should be settled before ground work can begin.

Understanding our soil and plants soil requirements are two vital keys for the gardener. Without a basic knowledge of soil, a gardener only plays the trial and error game. Amending the soil to conform to one's plan and matching plants to all components: aspect, location (sun, shade, wind), water needs, maintenance requirements and style criteria is vital in expanding one's plant palette.

After acquiring a basic understanding of our soils, it's time to apply your knowledge to your garden itself, whether in creating new beds or revitalizing existing beds, borders or lawns. This section discusses different situations gardeners face in creating new beds and borders in an existing landscape, particularly in regards to soil health.

Lawns, or turf, is so important to American Gardening, that an entire principle is dedicated to these residential expanses composed of a single plant type, turfgrass. The purpose of lawns, lawnscaping in general, alternatives to lawns, turf type choices, how to take care of turf, and water-conserving tips to implement in traditional landscapes are some of the issues discussed.

Gardening is all about making choices. None of the other seven basic principles of gardening illustrates the impact of choice quite as much as our choice of plants. Plants are the focus, the purpose, and the reason for the garden and illustrate the garden of our imagination. Choosing regionally appropriate plants that match your choices are essential to success.

To view lists of plants of different categories, such as native grasses, shrubs, flowers, and Southwest evergreens: cold hardy cacti, agaves, yuccas and other native evergreens suitable for the climate and soil conditions of the Texas Panhandle, click here. Often one just wants to scan a list of possibilities rather than reading through all the plant profiles, however, not every plant on these lists will be profiled.

The Texas High Plains region is part of the vast and treeless plains, at the southern end of the Great Plains. It is difficult for trees to grow effortlessly. Planting a tree is viewed as an act of hope and trust in the future. Care should be taken to match the tree to soil, location, exposure and water needs.

Efficient Use of Water

Water continues to be a precious resource on the Texas High Plains. Our average annual precipitation of 17-21 inches is sufficient for growing regionally appropriate plants, especially when moisture is used efficiently. In soil, where just adding more water is not always the answer, make every drop count, soak in, quenching the plant's thirst before it moves down the line.

Although all of the 7 basic principles of gardening are important and will greatly enhance your gardening success, the easiest to implement is to use mulch. Appropriate mulch covers help preserve moisture, improve soil structure and quality, helps prevent weed seed germination, moderates soil temperature and much more.

A lethal arsenal of products have been developed to eradicate weeds, insect pests and pathogens in the lawn and garden. Integrated Pest Management is a four-step system of managing landscape problems by using the methods that are the least harmful to the environment first, before considering chemical intervention.

Everything worth having requires maintenance, even lower water-use gardens that follow the other six rules of gardening. When a landscape is properly designed and implemented, matching plant to location, maintenance is greatly reduced. Maintaining the garden using correct horticultural methods, not seeking control but cooperating with the normal properties of our plants, is the gardener's simple mission.

Gardening is a succession of related tasks, when combined together, orders our garden. Choice of plants, climate, location, water supply, soil type and texture affects design and style choices. Our degree of knowledge, competence and time available to give to gardening affects the outcome. These are Stepping Stones to Success focusing on the week to week, month to month gardening timeline for the Texas Panhandle.

What garden style differentiates Texas Panhandle gardening from any other region across the world? What plants, accents and hardscape, when combined, bring to mind the Texas Panhandle? I've explored the shortgrass prairie, cliffs and outcrops, the plateaus and playas and have noted features, landmarks, colors and plants to gain some insight in formulating a distinctive Panhandle garden style.