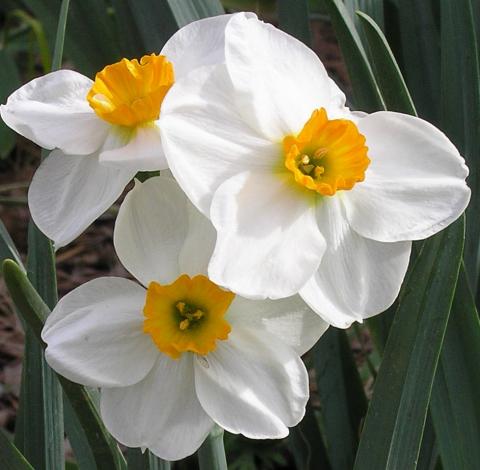 Bulb catalogs have been arriving in my mailbox since the weather turned hot. I normally just stack them on a shelf until after Labor Day to work out my order. It seemed each year it would be later and later into the fall before I ordered, and the varieties I'd want were no longer available.

I placed by bulb order nearly 3 weeks ago; everything I wanted was in stock. Well, not really. I wanted quite a few more than what I ordered, its always such a tough decision to pare it down to what garden space is available. This spring, after eliminating larkspur from my garden, I discovered I've opened up a bulb window in my front garden bed. Maybe it just looked that way because of the late freezes and hail. My garden notations told me I have a color vacancy for May and early June. Additionally, I dug out some very old bulbs that had dropped deep into the soil and lost vigor. Over the years, as the mulch decomposed, a good six inches more soil developed on top. In spring, a few weak looking leaves was all that emerged. So I have some room to try new flowers.

If you want anything but the most general of spring blooming bulbs, perusing deep into catalogs and websites is the only way to go. What with 13 divisions of daffodils and fifteen divisions of tulips (plus the non-official division of multi-flowering tulips), most of the catalog space is taken up by these two favorites. I wanted to give my garden even more of an American flavor, and after watching the recent repeat of the Corps of Discovery on PBS, my research turned me to native American bulbs. I began by searching for bulbs/corms more suited to a our high plains climate, but species that are noted to thrive in high desert areas more closely resembling our climate were not to be found. So, I ordered the closest thing I could find.

Most of bulbs I ordered have thin, grass-like leaves, some are native, and are members of the lily family. Once blooms of common spring bulbs have finished, bulb foliage is often just an unattractive presence in the garden through their withering until disappearance. I'm banking on a more pleasant foliage look with these new additions, but more so, an extremely pleasant look from the blooms themselves.

An native American (California) corm, Brodiaea coccinea, also known as “California Firecracker”, has clusters of 1” red tubular clusters, grows to about 2 feet and blooms in May/June. "Brodiaea is a genus with sixteen species restricted to western North America, ranging geographically from Vancouver, B.C. to Baja California. This name has been used for a whole group of plants referred to as the Brodiaea complex that also includes the genera Dichelostemma and Triteleia."(Pacific Bulb Society). Brodiaeas grow in sunny and grassy meadows and also in "adobe soils", could they mean clay? (Sunset Western Garden Book). This genus includes the Tritelia, Brodiaea laxa.

Another native of northwestern U.S. and the Rocky Mountains is Camassia quamash, or Indian Hyacinth. I've read they do well in most moist and dryer soils. Pale to deep lavender star shaped flowers on a 15” raceme. When the Corp of Discovery trekked across the Bitterroot Mountains in the fall of 1805, they were fed bread made from the root of the camas, or quamash, as it was called. Camas root was a regular in the diet of the Nez Perce tribe, although members of the Lewis and Clark Expedition, too, ate it frequently, but they never acquired a taste for it. William Clark wrote about this bulb in his journals, and Meriwether Lewis collected a specimen that remains in the Lewis and Clark Herbarium (Common to this Country, Botanical Discoveries of Lewis & Clark, Susan Munger, Artisan Books, 2003).

Set to bloom maybe the end of May and June is Calochortus venustus and C. venustus “Burgundy”. Calochortus is also known as the Mariposa Lily, sometimes Sego Lily. I've long read about it and am finally going to try it. There are a number of varieties native to the western half of the US. Sometimes catalogs refer to them as natives to California. Utah celebrates the Sego Lily as it's state flower, showing it as Calochortus gunnisonii or Calochortus nuttalli. Calochortus nuttalli is really the bulb I wish to purchase, for it's drought tolerance, but I was not able to find a retail source. C. venustus and varieties (and others listed) are available from Brent and Becky's Bulbs and D. Landreth Seed Company. The catalog advises it needs rich, well drained soil and hates repeated freezing and thawing. As our ground hasn't frozen in many years, I hope it will find my garden hospitable. Both the Camassia and Calochortus were used as food by Native Americans.

A non-native will be filling in part of the available space, Eremurus bungei, the foxtail lily, blooming from May to June (the catalog advises); in our climate, that will be May. The foxtail lily will grow to a height of 3-6 feet with a tall torch-like yellow spike of blooms. Foxtail lily plants have thin leaves that I'm hoping will disappear quickly after blooming.

To punch up the bed in July, I've ordered, Allium spaerocephalon, the drumstick allium. The drumstick allium should reach a height of 2 feet with a 1-2” egg shaped crimson flowers. Alliums naturalize well and are near fool proof. I do have some nutgrass in the bed these will be going into, so I'll be sure to label them well to avoid pulling them out by mistake (did I say fool proof?). Technically, they won't be blooming in the spring, but I can order and plant them with the other bulbs. Alliums are members of the Liliacea family, though placed in the Scillia, or squill section, rather than with the more showy Tulipas.

One of my favorite daffodils have dwindled over the years, Pheasant's Eye, in the Poeticus division of Narcissi. I ordered another two dozen. I tried to order the last two years but was too late. The leaves of the Pheasant's Eye aren't grass-like, but they are thinner than regular daffodils (which are a good deal thinner than tulips) and disappear quite quickly. If one is looking for heirloom plants, one need not look further than the Pheasant's Eye, described by Theophrastus in 320 BC. It is said this daffodil was nurtured and preserved over centuries due to its heady fragrance, the oil of which is used in many perfumes. I will readily admit, the poeticus daffodils have a particular hold on me. It is also thought that the poeticus narcissi are the narcissi that inspired the Tale of Narcissus. Hmmm, this pauses one in thought. Nonetheless, the siren of the Narcissi beckons me.